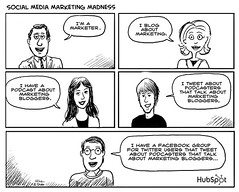 I've been on the Internet for about 14 years now. I remember using the Mosaic browser, and even Lynx. I've seen lots of trends come and go. I've usually been close to the cutting edge when it comes to the "next big thing" on the Internet. One of the biggest trends on the Internet lately is the number of people who claim they are Social Media Experts. If there was ever a completely overused term for the 2009 version of the Internet it is this term. From my observation those that claim to be social media experts are so just because they make the claim. I've been on the Internet, interacting socially with others for years. I've had various forms of blogs for 9+ years, used messengers, chat rooms, MMORPG, and etc. for years, thus my experience has to count for something, especially when compared to these people who all of the sudden claim they are the experts.

From my observation of the users of Twitter, just about 10% of its population claim to be a social media expert. I find it humorous that so many people claiming are to be experts in social media. First let us look at what Social Media is. According to Wikipedia.

Social media is media designed to be disseminated through social interaction, created using highly accessible and scalable publishing techniques. Social media supports the human need for social interaction, using Internet- and web-based technologies to transform broadcast media monologues (one to many) into social media dialogues (many to many). It supports the democratization of knowledge and information, transforming people from content consumers into content producers.

What you are reading right now (my blog) is a social interaction, it's highly accessible at a domain that I've owned for 9+ years, and it's scalable since I can easily expand upon it. I allow social interaction, by the way of comments, which allows others to add their input to the information I share, and I've become a content producer because of this. So if I read this definition correctly, I've done everything "social media" is for nearly 9 years, which in turn would probably make me an expert in the field. How many other social media experts can claim this much experience? Don't answer that question it's not really important. I guess my main point is what makes someone an expert in their field? In most fields it comes down to experience (hands on actually doing it day in day our experience) or certifications (book knowledge but no actual usage). I don't know of a Social Media Expert certification so it comes down to experience. Experience isn't having a couple thousand followers on Twitter, anyone can honestly do that, with a couple minutes of work a day. I have only 160 followers on Twitter because I've chosen the path of not automatically following everyone that follows me. This is an active decision I've made because I like to communicate personally with the people who follow me. The creation of lists on Twitter appears to be my chance to finally expand my followers-base. I can no separate people I follow into those that I want to personally communicate on a whatever my time frame is basis, and those that I just want to disseminate content to.